Several people I respect have expressed they are voting for Obama, but I still don’t get what they see in him.  Yes, there are several issues that I don’t agree with McCain or Palin on.  But, when it comes down to it, I’m deeply scared about Obama becoming our president.  I’ve struggled for months to understand Obama and I can’t find any peace about electing him.

Socialist Agenda…
Redistribute the Wealth… It’s hard to see Obama’s tax and financial policies as anything more than taking from the rich and giving it to the poor.  That’s just wrong for the government to do that.  Instead we should be encouraging everyone to prosper and reach their full potential.  And it’s morally wrong for us to create any additional sense of entitlement for those that don’t work hard.  We should be encouraging the rich to compassionately help the poor to get out of poverty, not punishing the rich for their success.

Right to Health Care… I’m sorry, but healthcare is not an inalienable right. While it makes sense to fight pandemic diseases and maintain policies that promote health, healthcare is not a right.  The beauty of our constitution is it’s simple focus on fundamental natural, civil, and human rights.  It gives people the freedom to choose and rise to their potential.

OK, I know some of you are questioning my understanding of and commitment to the Gospel and it’s social significance.  I’m a huge proponent of the Church serving the social needs of the world.  And it’s a shame that the Church has done such a poor job of it that many people now think that it’s the government’s job to provide social justice to our world.  The Church needs to rise and reclaim it’s calling from Christ to care for the needy and oppressed.

World View…
I think it’s a bit over the top that many Christians base their entire election choice soley on abortion.  But, while abortion is not the only issue, it is very important.  How a candidate values life is a significant indicator of their world view. And Obama has a clear record of not valuing the life of unborn children and also communicating incongruent perspectives on the issue when talking to different interest groups. It also perplexes me how Obama can champion the rights of the poor to have healthcare and financial success, but yet support killing children who haven’t been born yet.  He fights for the right to healthcare of a 1 minute old baby, but not the right to life for a baby 1 minute prior to birth.  That doesn’t seem like a consistent world view.  It worries me that perhaps his policies are designed to get votes of minorities, rather than to make a right, moral decision.  What group will be next to be taken advantage of?

Vague Plans…
Obama communicates very smoothly, but rarely ever says much of substance.  He often comes across as a broken record advocating change.  Yet, his political record in the Illinois and US senates don’t really show that he’s much of a changer.

I do fundamentally disagree with Obama on some issues such as Defense, Economy, Education, Foreign Policy, Healthcare, Immigration, and Taxes.  But what scares me even more is that many of his other positions on key issues sound kind of good.  When I dig deeper on these issues I agree with, I realize Obama often doesn’t actually address the core problem or have a clear solution.  He promotes generic change on a lot of issues, but has no clearly communicated plan of what that change might be.  It seems like we’re gambling that Obama’s changes might be something we agree with.

Your Feedback…
Maybe I’m missing something and am confused.  I’ve been wrong before.  So, if you have similar values as me and are an Obama supporter, I’d like to hear what your reasoning is.  Let me know your thoughts on why you are choosing Obama or McCain by posting a comment here or emailing me directly.

And, be sure to vote!  Don’t just listen to the polls and think the outcome is already guaranteed one way or another. 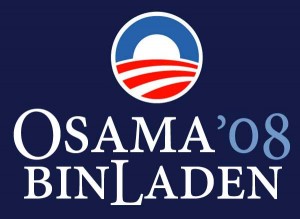 But, is Osama’s latest campaign artwork incredibly similar to the Obama-Biden campaign?

It’s a joke people.  Don’t throw too many daggers at me.

A friend of mine told me about this.  I was shocked to see this…

You can spread this viral video here. Would you vote for me?

At the recommendation of a consultant, I recently read The Five Dysfunctions of a Team by Patrick Lencioni.  It was a quick, insightful read and I really liked Pat’s writing approach.

Recently Ken Coleman at Catalyst interviewed Pat for their podcast.  Pat offers up some advice on:

Check out the interview with Patrick Lencioni, starting at about 20 minutes into the following interview:

What do you think makes for a miserable job?

What do you think of Pat’s comments on Obama?