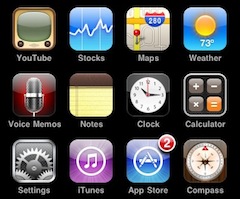 Today we finally became a 2 iPhone family. As I was gathering up my suggestions of iPhone apps to share with my wife, I decided I’d go ahead and share them with everyone. Most of these apps are free. I’ve attempted to group them into types of apps as best as I can.

My office mate, Matt, currenly has 254 apps installed on his iPhone.  That’s more than the iPhone is actually capable of displaying on it’s home pages.  Anyway, I also asked him for his recommendations of best apps.

What are your favorite iPhone apps that you use at least once a week?

I read almost all of my news and blog content via Google Reader.  And now with a newer feature in Google Reader, I’ve started sharing news that I think others might like.  So, rather than pasting content from other blogs or news sites, I simply add them to my shared news feed.

If you share any similar interests with me, you might find that subscribing to my shared news feed is useful:

Let me know if you find this useful.

OK, I mentioned Yahoo Pipes back a few months ago, but never had really created anything with it till yesterday. I was trying to figure out how to sort, combine, and limit the number of items in some existing RSS feeds I manage. Enter Yahoo Pipes.

Pipes lets you do some powerful things with RSS feeds and other web content.

Check out my first three pipes:

This seems very powerful. I want to see about creating some other custom feeds from various sources.

I keep hearing rumblings about this presidential candidate named Ron Paul. I finally looked him up and he definitely grabs my attention. At first I wasn’t totally comfortable him being antiwar, but I’m starting to warm up to that idea. He appears to not exactly be ‘antiwar’, but more about the US not needing to act an international police force. I resonate with that, though I also value the importance of our military and international law.

I also like the idea that he appears to really value integrity and authenticity. One of his campaign slogans is “Google Ron Paul”, which implies to me that he isn’t afraid of you finding out something bad about him. I like that.

What do you think of Ron Paul? Does he have a chance of becoming president?